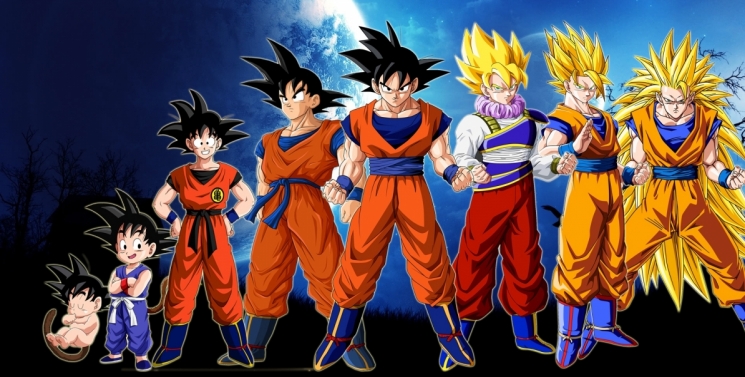 My childhood was filled with full of manga and anime series, fairy tales, video games and traditional games with other neighborhood children. The most influencing hobbies motivated me to imagine and draw were manga and anime series that my mom kept searching and buying for me all the time. She’s a wonderful woman.

Although reading quite a lot, Dragon Ball is still one of my 2 favorite manga series along with Doraemon. It even significantly affected to the way I have grown up. Yes, it was just the beginning of my junior high school 21 years ago. There was a long time during my high school years that I wish I were born a boy. However, forget about it. If you are a fan of Dragon Ball, I am sure that you will have specific characters in the series that strongly inspired you. So do I.

I love Son Goku a lot. He’s really a perfect protagonist of the series. He has gradually grown up through every challenge, every enemy, every battle that he survived. Many people can feel unreasonable to have such an overpowering character because no one is perfect. So what! He’s not an earthlings, he’s a Saiyan – the mightiest planet and civilization of the universe! (Of course it’s a fiction storyline…)

He has an absolute pure heart with boundless love for his beloveds. Since being a child, he was already super strong but also very innocent that couldn’t even distinguish women from men. It’s reasonable because he grew up in a jungle. Not until taking the adventure to find all the dragon balls did he gradually discover more about the world. And he also had more opportunities to learn martial arts from the best martial artists. His Saiyan blood was the reason for his incredible strength and capacity to learn new and complicated martial arts. It had always been a question mark to all of his friends for a long time that what kind of people he was before they discovered his origin. He was even from another planet far away from the Earth. I love how Akira Toriyama – the creator of Dragon Ball designed Goku as an outstanding protagonist even from the origin. Goku is the strongest martial artist having the purest heart despite of his special combative Saiyan blood.

From childhood to adulthood, Goku has encountered many enemies and gained more friends through the battles. A special point in Goku that I found interesting is that he has always granted his mercy to the enemies and letting them alive, especially when they begged for mercy. To a certain extent, it was just because he’s a good person. But on another viewpoint, I like this depiction because it makes him more likely a human. He’s selfish. He rather desires to fight against the strong enemies than think about saving the weak. You can see he’s always excited to know if the upcoming opponents are strong or not. What a crazy guy! I love him <3 When the storyline went to the next generation being his son, Son Gohan, I thought this next generation would replace Goku in terms of the strength and capacity to protect the world. However, the author still kept Goku the strongest protagonist of Dragon Ball. Although it’s selfish to remain Goku the strongest person, I had no objection because Goku was such a perfect character for the series. He has always kept the readers surprised whenever he came back to his friends with new cool and incredible techniques. I was very sad when the series ended but happy at the same time seeing Goku was still the best person in the world of martial arts until the last chapter. The manga idol of my childhood finished his own adventure but then opened new adventures for everyone and his legend remains.

This site uses Akismet to reduce spam. Learn how your comment data is processed.